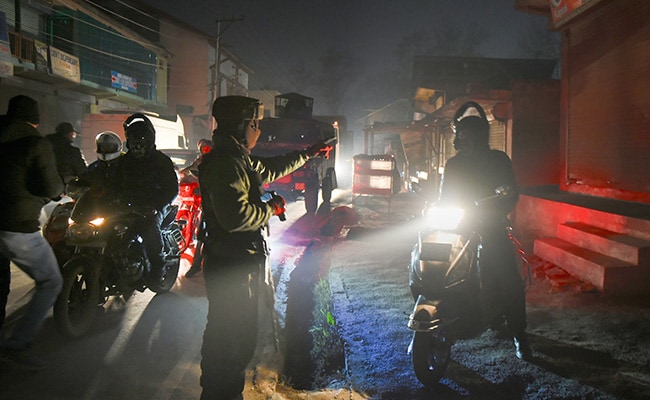 Around 97,000 candidates had appeared in exams conducted by the JKSSB.

The probe panel will be headed RK Goyal, Additional Chief Secretary Home, Jammu and Kashmir. The aggrieved candidates however demand a CBI probe given the magnitude of the alleged scam.

The protesters allege brazen discrepancies and manipulation of the merit list released by the Jammu and Kashmir Service Selection Board or JKSSB.

Around 97,000 candidates had appeared in exams conducted by the JKSSB.

Addressing a police function, Mr Sinha said a panel has been constituted to probe the allegations.

“All the recruitment process held so far have been transparent and clean. But fingers have been raised against the J&K SSB list of SI posts. We have decided to constitute a committee that will be headed by Secretary Home to probe the allegations levelled by some people,” said Mr Sinha.

After Jammu and Kashmir was stripped of its statehood and special constitutional status in August 2019, the administration promised to fill 50,000 vacancies in government departments within three months. But even after three years, fewer post have been filled and the recruitment process has been very slow.

Days after the merit list of sub-inspectors in police was made public, serious discrepancies have surfaced. Among the toppers in the list are allegedly siblings from 20 families raising doubts about the fairness of selection process.

The selection of 40 candidates from a specific area and specific centre in Jammu has also raised eyebrows.

20 Family siblings in the JKPSI toppers list?#Jkssbscam#JKPSI#jkssb JKSSBs’ credibility? I appealed @jkssbofficial please look into this matter. Justice for all dedicated students who are deserving for this post …. pic.twitter.com/20LRXledhI

JKSSB taking bribe & manipulating result.
•Students with 140+ marks in JKPSI had low scores in FAA (90 % syllabus is same)
•40 students selected from Akhnoor with centre in library
•Siblings of 20 families in the topper list

Appeal to @jkssbofficial to look into the matter.

“We demand a CBI probe. If government has nothing to hide they should order an impartial probe and expose this massive scam” says an aggrieved candidate.