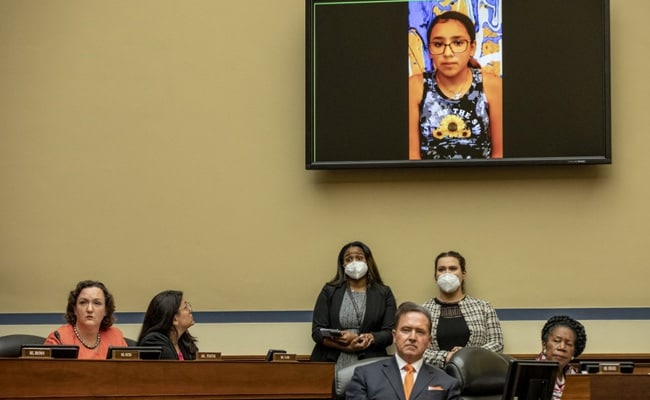 An 11-year-old girl told horrified lawmakers Wednesday of smearing herself in her murdered classmate’s blood to play dead during the most chilling in a spate of gun massacres that have convulsed the United States.

Miah Cerrillo, a fourth grader at Robb Elementary School in Uvalde, Texas, recounted for a House of Representatives committee the moments when 19 of her fellow students and two teachers were killed by a teen gunman last month.

She recalled how her class had been watching a movie and scrambled behind their teacher’s desk and their backpacks when the shooter burst into the room.

“He… told my teacher ‘good night’ and then shot her in the head. And then he shot some of my classmates and the whiteboard,” Miah said in a brief but gut-wrenching pre-recorded interview.

“When I went to the backpacks, he shot my friend who was next to me and I thought he was going to come back into the room so I grabbed a little blood and put it all over me.”

Miah recalled how she kept completely silent, before grabbing her dead teacher’s cell phone when the moment came and dialing 911.

“I told her that we need help — and (we need) to see the police in our classroom,” she said.

Police in Uvalde have come under intense scrutiny after it emerged that more than a dozen officers waited outside the door of Miah’s class and did nothing as the children lay dead or dying.

Miah was asked what she wanted to see happen in the wake of the attack.

“To have security,” she said, confirming that she feared a mass shooter could target her school again.

“I don’t want it to happen again,” she said.

Miah — whose account of the shootings left some lawmakers in tears or wide-eyed in disbelief — is having nightmares and still healing from bullet fragments in her back, according to her father Miguel Cerrillo.

“She’s not the same little girl I used to play with,” he told the committee.

Her testimony came with Congress facing mounting pressure to respond to spiraling gun violence — and particularly mass shootings — across the country.

Massacres at Miah’s school and days earlier at a supermarket in Buffalo, New York have shocked the nation, reigniting urgent calls for gun safety reforms.

The House Oversight and Reform Committee also heard from the mother of Lexi Rubio, a Robb Elementary fourth grader who was killed.

“We don’t want you to think of Lexi as just a number. She was intelligent, compassionate and athletic,” Kimberly Rubio said via a video link, wiping away tears as she sat next to her husband Felix.

“She was quiet, shy, unless she had a point to make. When she was right, as she often was, she stood her ground. She was firm, direct, voice unwavering. So today we stand for Lexi and as her voice, we demand action.”

Roy Guerrero, a pediatrician who attended to several victims in Uvalde, spoke of encountering “two children whose bodies had been pulverized by bullets fired at them, decapitated, whose flesh had been ripped apart.”

‘Elected to protect us’

A cross-party group of senators is working on a narrow collection of controls that could develop into their first serious attempt at gun regulation reform in decades.

But it does not include an assault weapons ban or universal background checks, meaning it will fall short of the expectations of President Joe Biden, progressive Democrats, and anti-gun violence activists.

And even this compromise deal has to run the gauntlet of an evenly divided Senate and earn the votes of at least 10 Republicans, most of whom are against significant regulatory reform.

On the other side of the Capitol, House Democrats passed a much broader package of proposals late in the day that includes raising the purchasing age for most semi-automatic rifles from 18 to 21.

Those proposals are however going nowhere — they do not have the 60 votes they would need to advance in the Senate. But Democratic leadership has been keen to act after the spate of recent mass shootings.

“You expect us to continue to forgive and forget over and over again? And what are you doing? You were elected to protect us and protect our way of life,” the retired fire commissioner said in an emotional appeal to senators.