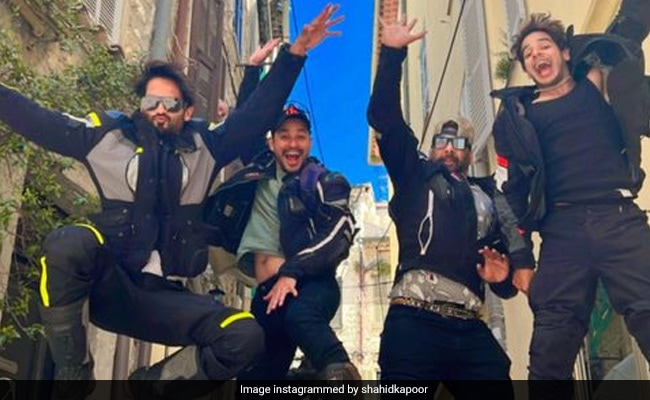 New Delhi: Shahid Kapoor, who is busy holidaying in Europe with his brother Ishaan Khatter and friends, including Kunal Kemmu, recently shared two posts on his Instagram handle, giving a glimpse of his fun-filled trip. In the first post, the actor has shared happy pictures with his biking gang, including Kunal and Ishaan. In the photos, the boys look dapper in all-black outfits with their stylish helmets. Sharing the post, Shahid captioned it as “#besttimes”. Soon after he shared the post, his fans flooded the comment section.

In another post, Shahid Kapoor shared a video of his trip from Europe, featuring Kunal Kemmu and Ishaan Khatter. The video has some fun-filled moments with his friends. Soon after he shared the post, his mother, Neliima Azeem, dropped fire and love-struck emoticons. Check out below:

Earlier, Shahid Kapoor shared an adorable post on his Instagram stories, confessing that he’s missing his wife, Mira Rajput. He wrote, “When in the middle of a biking trip all you can think of if why is mi amor (my love in Spanish) not here… @mira.kapoor”.

Kunal Kemmu has also shared an adorable video on his Instagram handle from his Europe diaries and captioned it as “Hearts full of love joy and gratitude Vroom vroom”.

Meanwhile, on the work front, Shahid Kapoor was recently seen in Jersey, co-starring Mrunal Thakur and his father, Pankaj Kapur. Next, he will be making an OTT debut with the Amazon Prime Video series Farzi, helmed by Raj and DK. The web series also stars south superstar Vijay Sethupathi.