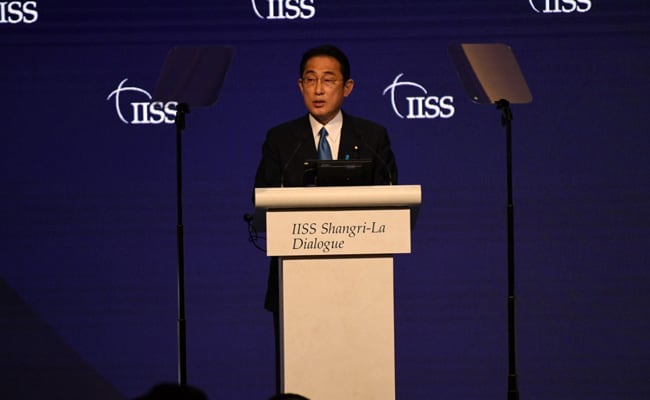 US officials have said they believe China is closely monitoring how Russia’s invasion of Ukraine progresses to assess their own plans when it comes to Taiwan.

Tensions have been soaring over the island, which Beijing views as its territory and has vowed to seize one day, by force if necessary.

Kishida told the Shangri-La Dialogue security summit in Singapore that while Japan is a peace-loving nation, the changing regional and global security landscape has prompted Tokyo to reassess its own defence position.

“In light of Russia’s aggression against Ukraine, countries’ perceptions on security have drastically changed around the world,” he said in a keynote address to defence ministers, senior military officers and analysts attending the summit.

He cited Germany shifting its security policy by raising its defence budget to two percent of gross domestic product and Finland and Sweden abandoning their traditional neutrality to push for NATO membership.

“I myself have a strong sense of urgency that Ukraine today may be East Asia tomorrow,” said Kishida, whose country has joined Western-led sanctions against Russia.

As prime minister, Kishida said he has the responsibility “to protect the lives and assets of the Japanese people” while contributing to regional peace and security.

He warned however that the world must be “prepared for the emergence of an entity that tramples on the peace and security of other countries by force or threat without honouring the rules”.

Kishida called for the “rules-based international order” to be upheld, in what appeared to be a veiled reference to China’s growing assertiveness in the Asia Pacific region.

To protect itself, Japan needs to “enhance our deterrence and response capabilities”, he said, adding that his government will set out a new national security strategy by the end of this year.

Kishida’s ruling Liberal Democratic Party has laid out longer-term policy goals including expanding Japan’s defence budget beyond two percent of GDP, a ratio that would put it on par with members of NATO.

That would mark a departure from Japan’s political tradition of capping defence spending below one percent of its GDP, which stands at around $5 trillion.