With A Pup, A Migrant Crosses 8 Countries En Route To US 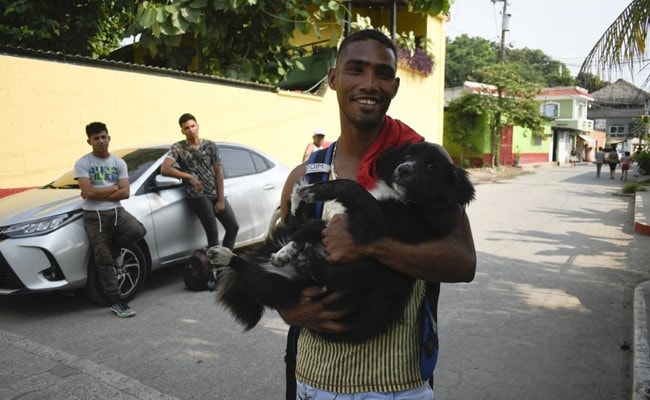 “The issue is with those cops who take our money,” Rodriguez said.

With his fluffy black dog in tow, Gilberto Rodriguez left Venezuela two months ago on a perilous eight-country journey, mostly on foot, with dreams of a better life in the United States.

But he smiles from ear-to-ear as he caresses his loyal canine companion of two years, whose name “Negro” means “Black” in Spanish.

“He has also crossed everything just like us, he eats the same we eat, he’s also a migrant,” he told AFP in the town of Tecun Uman in eastern Guatemala, the sixth country stop on his north-bound route.

Their journey so far has taken Rodriguez and Negro from Caracas to Colombia and through the perilous Darien jungle to Panama.

There, they came across some of the criminal gangs that prey on migrants fleeing poverty and political upheaval in their home countries.

“We were with some women and they raped them,” Rodriguez recalled. “As for us, they stole our phones.”

The pair then made their way through Costa Rica, Nicaragua and Honduras to Guatemala, where they joined hundreds of other undocumented migrants eyeing the Suchiate River that separates them from Mexico.

Unlike a few months ago, there are no crowds on the Guatemalan side of the river.

Police stop and board buses to verify the identity documents of travellers in an operation seeking to prevent the formation of migrant caravans.

Since January this year, Guatemala has expelled more than 500 migrants from Honduras, El Salvador, Nicaragua, Venezuela and Cuba.

To evade detection, migrants have taken to moving in small groups instead, with plans to meet up again once in Mexico.

There awaits the final hurdle: the Rio Grande, which separates Mexico from the United States.

US President Joe Biden’s administration has been seeking to end the implementation of Title 42, a public health order that has allowed for the expulsion of migrants during the Covid-19 crisis.

The move to lift the order sparked uproar at home for fear it would boost undocumented migrant arrivals even with numbers five times higher on average than in the years before the coronavirus outbreak.

But Rodriguez and most of the other migrants making their way north say they have never even heard of Title 42.

A more pressing concern is evading the police in Guatemala — and not only to avoid arrest.

“The issue is with those cops who take our money,” Rodriguez said.

On their long trip, the man and his best friend have often had to rely on charity, sometimes sharing their food.

When shelters did not allow animals, they slept on the street.

Why put himself through this? “We had to flee,” Rodriguez said of his life in Venezuela.

“The salary is not enough, you buy everything in dollars and what they pay you in bolivars is nothing.”

On the penultimate stretch of his journey, Rodriguez clambers onto a boat made of old tires and planks, a trip for which he paid just over $1.

He clutches Negro in his arms as a man pushes a long oar along the river floor, and ten minutes later, they are across.

The dog, seated quietly between his master’s legs during the crossing, quickly jumps off and onto dry land, now in Mexico.

“We have crossed mountains, rivers, streams… we are no longer afraid of anything,” said Moises Ayerdi, a 25-year-old Nicaraguan migrant who made the same trip.

He said he had left his home, wife and three-year-old daughter because he was the target of political persecution by President Daniel Ortega’s government.

“Our feet hurt, we arrived here sick… We are used to it. We will continue. Just like we crossed Honduras, Guatemala, we will cross Mexico,” he vowed.